The lower and upper borders are later additions.

An octogonal pavilion stands amongst flowers and fruit trees. The arcature’s slim columns are ornated with foliated garlands. On the pavilion’s floor a patterned carpet is set.

Inside nine persons talk about the scene depicted on a piece of fabric held by the two women in the center. On this scene a fully dressed man lying in a bed pulls towards him a naked woman.

Inscriptions identify three of the nine persons. Justice (holding a sword in her hand) on the far left side next to Charity facing her, on her right. To the left of Charity is standing Faith whose name appears next to her feet.

In the foreground a man is seating on a low wall and kisses a woman standing in front of him.
In the background is depicted a landscape with two women by the side of a fountain and several other characters in the back.

This tapestry belongs to a series of ten panels about :

The redemption of humanity by Christ.

The artwork highlights the fall of humankind and its weakness to resist temptations despite help from the Virtues and emphasizes Christ’s mission to reconcile humankind with God and thus reach redemption.

The content of those visual stories is inspired by Christian Scriptures as well as allegories, poetry and Medieval tragedies. Trees, flowers and rivers divide each episode. 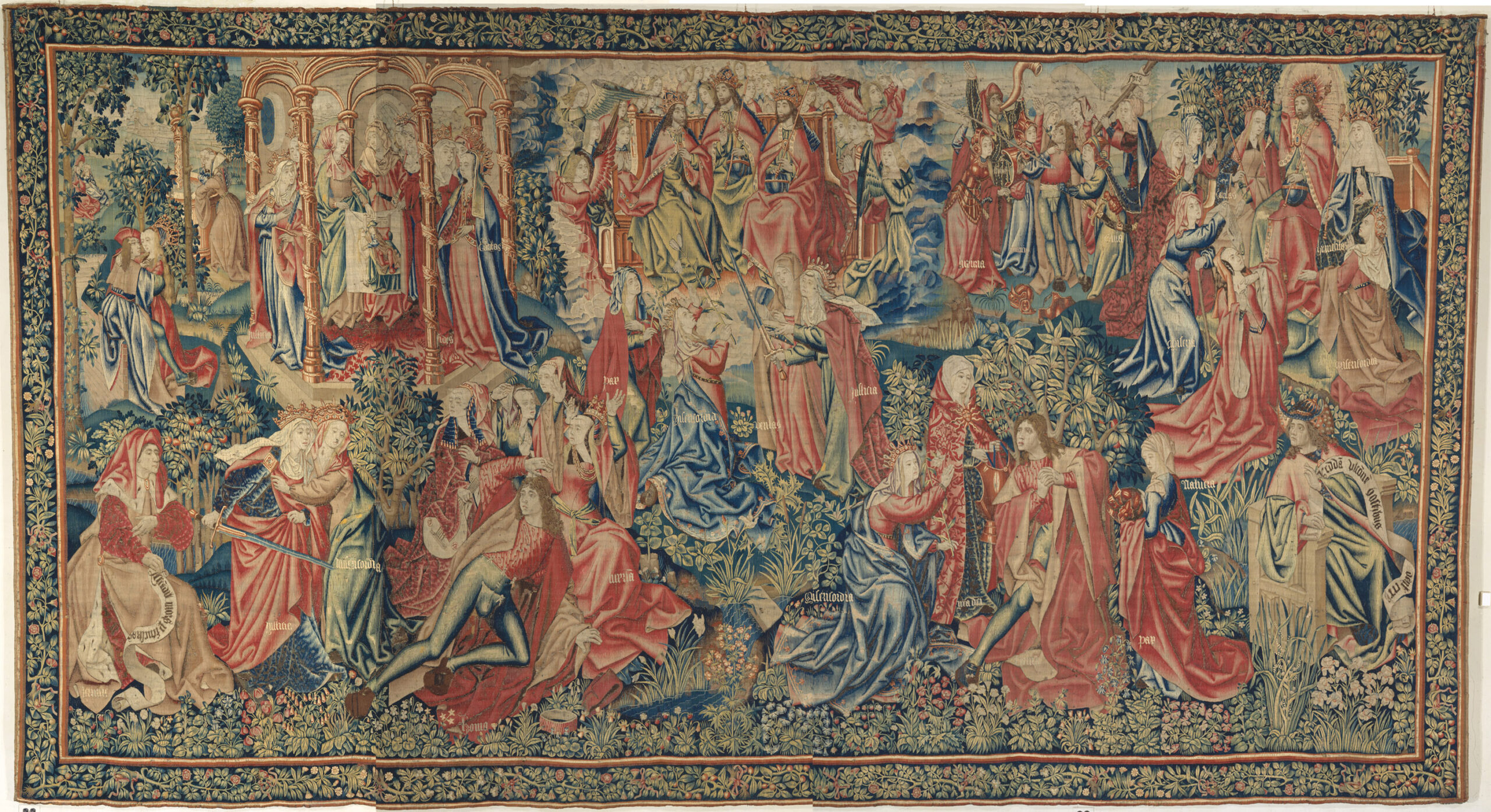 An identical panel is mentioned in 1514 in the collections of Juan Rodriguez de Fonseca, bishop of Burgos, Spain. The panel is mentioned once more in 1524 in his death inventory.
This panel and another one from the same series has been acquired by New York’s Metropolitan Museum in 1926.

Three of those tapestries now belong to the collections of Queen Elizabeth II in Hampton Court palace. 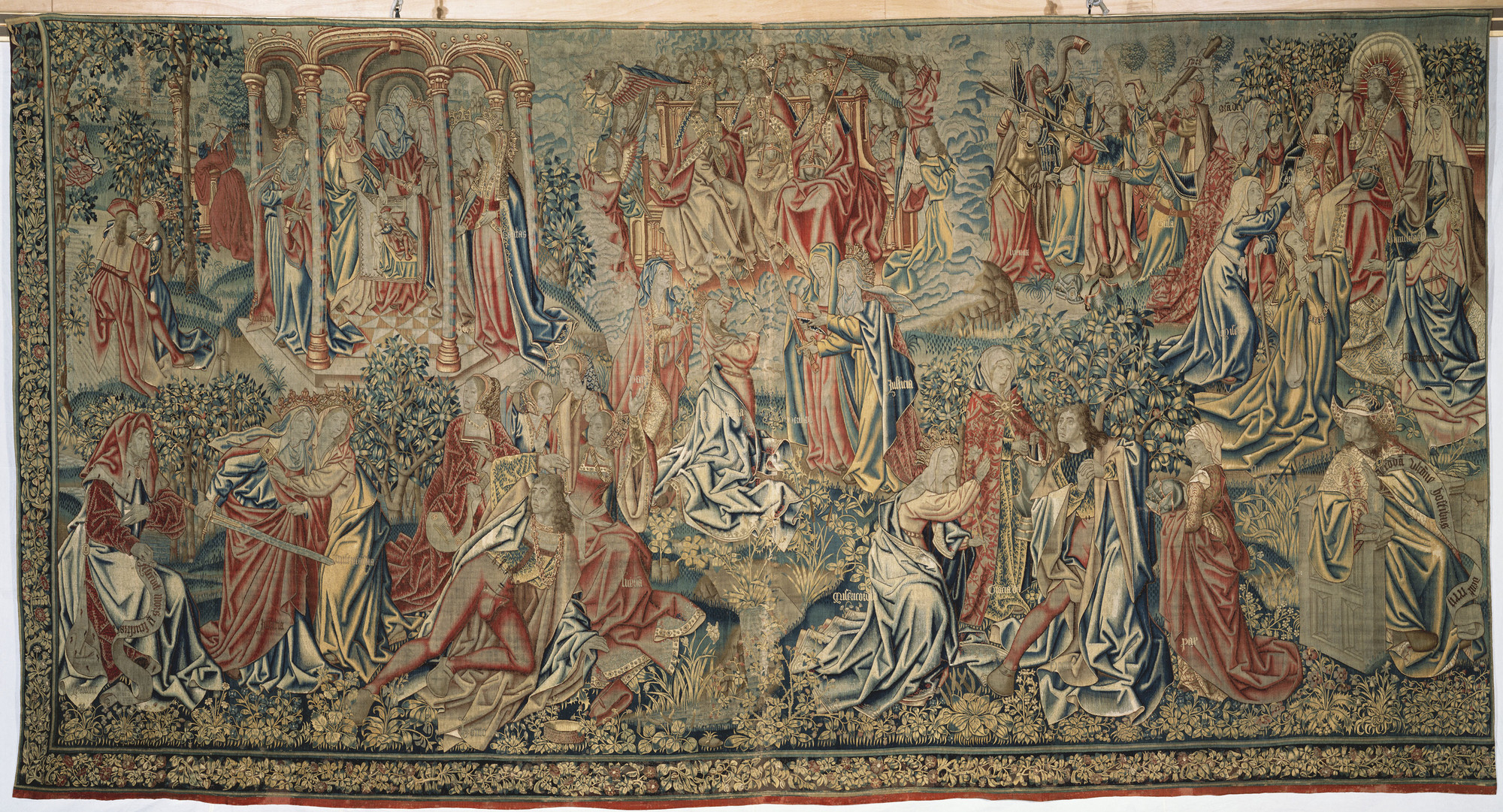 Our tapestry is part of an ensemble much more important belonging to a larger series of ten tapestries. The panel is the third episode of a complex visual story inspired by Scriptures and corresponding allegories developed in poetry and Medieval theater.

The use of open pavilions as decor of inside scenes and the labeling of the characters find its origin in Medieval theater, pantomime shows and contests held in town during ceremonial entrances or religious processions.

While some of the characters and events depicted in those tapestries also appear in moralizing texts and poems no work has yet been found compiling all of them. Such a work might have existed but it is also possible that this work would have been written to the sole purpose of the tapestries’ conception.

The first scholar who has singled-out a group of tapestries illustrating this subject was D. T. B. Wood in 1911. He has identified eight compositions illustrated by panels from different collections as part of a series he called The Seven Deadly Sins. He thought some panels bought by Cardinal Wolsey in 1521 for Hampton Court Palace and named The History of the Seven Deadly Sins was in fact the very same composition. Two more tapestries were later added by other scholars.

In 1976 Anna G. Bennett has observed that in fact three stories converge together allowing her to distinguish three main topics : the divine conflict, the human conflict and the story of the Redeemer.

Some of the characters belong to Judeo-Christian mythology, others are personifications of virtues and vices originating from Psychomachia, a work authored by Christian poet Prudentius (348 – 405).

Some others are allegorical figures embodying mankind and mankind’s nature. The tapestry can also be compared to Everyman, an allegorical and moralizing play written in the late 15th century by an unknown author.

The influence of the parable of the Prodigal Son can also be seen.

Those thematics are so close that artists who conceived tapes- tries could have taken some groups of characters and use them in close contexts.

The first of the ten compositions shows the Trinity creating the world, the temptation and the fall of Adam and Eve and their eviction from the garden of Eden.

In the second tapestry, the man (Adam) has fallen from his state of grace and loses himself in debauchery, seduced by Vices and led to greater mistakes because of the temptations of the flesh. All along the scenes he appears in rich clothes emphisizing his relation to the Prodigal Son observes Anna G. Bennett.

Our tapestry is the following one, explained below. 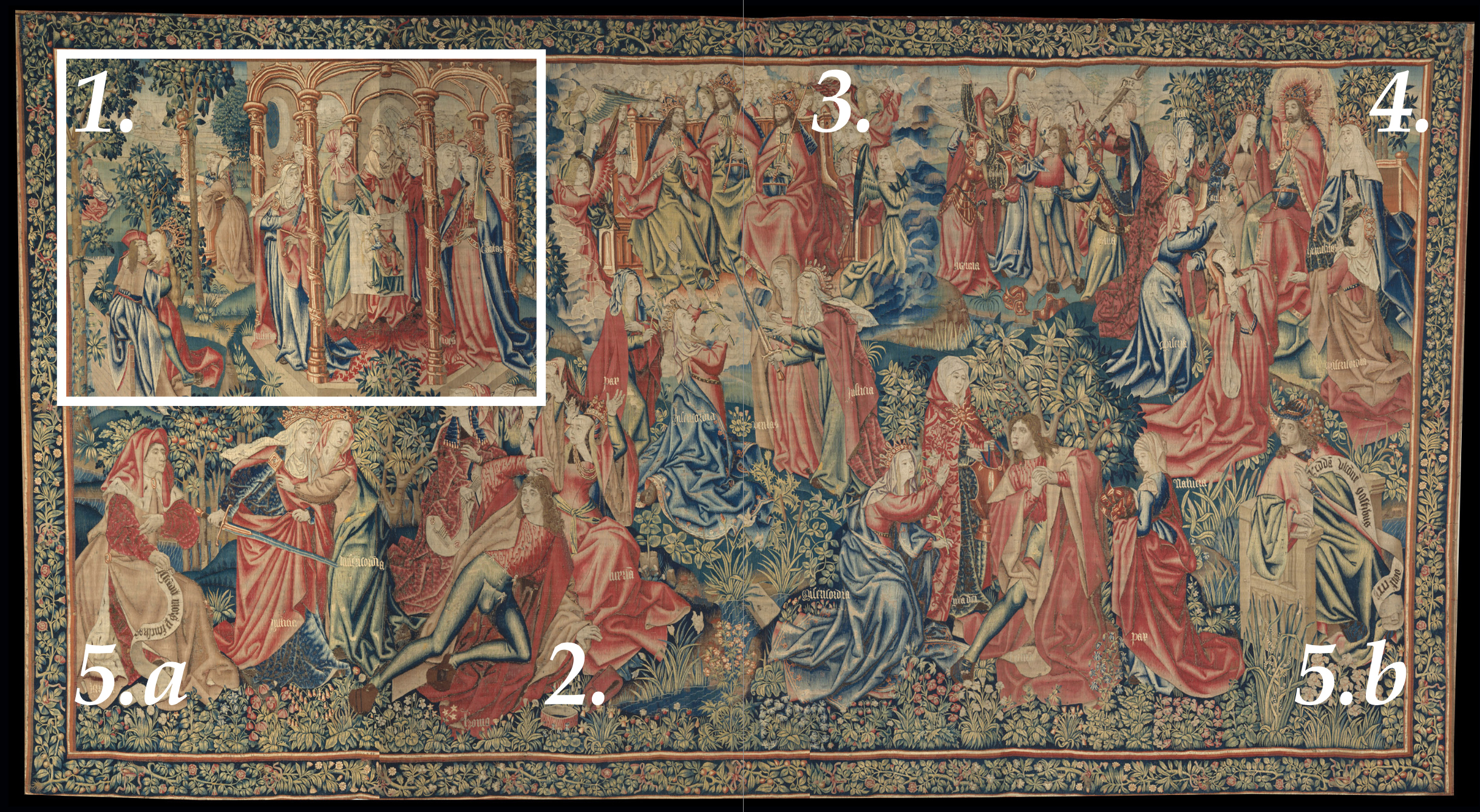 1. The garden of love is represented in the upper left corner where the man is still pursuing his lustful life. We see him in the garden kissing a woman by force and on the piece of fabric exposed he pulls a naked woman to his bed.

2. Those revelations convince Justice to punish the man. She finds him in the company of Vices and draws her sword to hit him. At that moment appears Mercy who saves the man from the sword of Justice.

3. To settle the man’s fate, four Virtues – also called the Four Daughters of God, namely Peace, Mercy, Truth and Justice – plead to the Trinity during what is known in contemporary literature as the Trial or Parliament of Paradise. This is an allegorical depiction of God’s deliberation ; does the man need to be punished for his sins or sent back to his original state of grace. Peace and Mercy plead in his favor while Truth and Justice plead against him.

4. On the right hand side of this scene Mercy, Peace and Grace go back to heaven to plead once more the right of the man to be redeemed. Misery accompanies them and shows to Christ his promise to save mankind. Nature tears her own dress. Seated between Charity and Humility, Christ raises his hand to state that he will incarnate and die to save mankind. It’s the apex of the drama.

5.a & b. On one side of the composition is shown Jeremiah saying « Because death came through the window » and on the other side Moses says « I will give revenge to my enemies », approving the pleas.

Most of the scholars have dated this series to the first quarter of the 16th century based on the style of the artwork. Digby (1980) made a case for this datation with the fact that Don Juan Rodriguez de Fonseca (died in 1524) had bequeathed some tapestries from the series to the Burgos Cathedral and because Cardinal Wolsey had purchased what is thought to be panels woven after the same cartoons. Souchal (1973) dates the ensemble from the early 16th century, or because the architecture seems Gothic from the late 15th century. Regarding the clothes of the characters most of them are of no help – historical and allegorical characters rather than contemporary civilians – and the few evidences lead to a date around 1500.

Some figures appearing in those compositions are similar to figures identified in Flemmish paintings from the second half of the 15th century. The artist was evidently familiar with Flemmish painting but was also able to mix different spaces and subjects to answer the specific needs of the tapestry’s conception.

However, the drawing style, the modeling of shapes, the figures and the quality of weaving are traditionally associated to productions from Brussels.

Anna G. Bennett, Adolphe S. Cavallo and Standen have compiled complete lists of the known surviving tapestries (complete and fragmentary) part of the series Redemption of Mankind. The following list comprises the datas from those three sources :

1. The Creation of the World and Man falling out of grace : four complete tapestries :

– Kasteel De Haar, Haarzuilens, Dutchland, collection of the Duke of Berwick and Alba.

– Saint-Just Cathedral, Narbonne, only surviving panel from the series of ten given to the Cathedral Chapter by François Fouquet, archbishop of Narbonne in 1673.

– 1878, collection of M. Richard, described as lacking its border.

2. The Principal Man of Vices in a Sinful Life : four complete tapestries :

3. Peace and Mercy win the Promise of Redemption for Mankind : A complete tapestry is exhibited in the museum of Burgos Cathedral. Another complete one exists, as well as two abbreviated ones and three fragments.

4. Christ born as Redeemer of Man : A complete tapestry exhibited in Burgos Cathedral. No other examples known.

5. Christ Saviour as a Child :

– A complete tapestry in Palencia Cathedral, bequeathed by Juan Rodriguez de Fonseca.
– Another one cut in half is kept at the Fogg Art Museum, Harvard University, Cambridge, and may be from Castello Ventoso, Portugal.

– Museum of Fine Arts, Boston, collection of the Duke of Berwick and Alba .

– Another piece at Hampton Court Palace showing the right half of this composition.

– San Francisco Museum of Fine Arts, from Tole- do Cathedral.

– Kasteel De Haar, Haarzuilens, Dutchland, collection of the Duke of Berwick and Alba.

– Two abbreviated examples, one at the Art Institute of Chicago, collection of the duke of Berwick and Alba, 47 and another one in Vatican.

– Kasteel De Haar, Haarzuilens, Dutchland, collection of the duke of Berwick and Alba.

– Louvre Museum, collection of the duke of Berwick.