Diameter of the table-top : 57cm

Paris is the capital that sums up the best those two aspects during the World Expositions, especially with the erection of the Eiffel Tower on the banks of the Seine River in 1889 and the building of a new bridge Pont Alexandre III inaugurated in 1900. That same year the underground metro network opens, and the decor of the station entrances is designed by architect Hector Guimard (1867-1942), a major figure in the Art Nouveau movement.

The Art Nouveau or Modern Style is an artistic movement blooming in Europe during the late 19th century and reaching its apex within the first decade of the 20th century. This movement appears in reaction to the industrialisation drift and the stiffness of metallic buildings.

This style is mainly based on a principle of a return to nature with soft lines and sinuous curves. Artists and architects invent shapes adorned with scrolls, fauna and flora motifs, visions of an idealised woman. Those artists draw inspirations from figures and lines to be found in nature.

The Art Nouveau is not limited to a sole imitation of nature but favours instead a stylisation of the line, sinuous as a coup-de-fouet (whip lash).

During the late 19th century, tastes are still very much marked by previous styles such as Second Empire particularly enjoyed by the bourgeoisie. However some furniture designers eventually break free from the past to create a singular and unique style. This style finds its origins in the Arts & Crafts movement initiated by William Morris (1861) that opposed its time and the products of the Industrial Revolution. Morris believed in artisanal work and in a certain closeness to nature whether in materials or shapes.

The Art Nouveau, inspired by Japanese art as much as by an idealised universe, divorce from European traditions, creating new forms for specific pieces of furniture including our side-table. Those pieces do not look like any other. While flowers have always been a favoured motif in furniture designs here they are not represented in bouquets or garlands but depicted free and new. Indeed designers honour flowers, exotic and aquatic plants that are not common in furnishing. We can mention water lilies, irises, sea weed, umbels, ivy.

The side-table, by Georges Rey

This exceptional side-table from 1900 is the work of artist Georges Rey. Indeed, an oval inlaid stamp mentions his name “G. REY” on the back of the table-top. About this talented cabinet-maker, whose studio was located on 44 rue de Charenton between 1905-1920, we know very little.

Georges Rey participates in the World Exposition held in Milan in 1906 where he wins the gold medal in the category : “Section 7 / Decorative Arts – group 41 to 45” for a piece of furniture.

We do not know if it is our side-table or if it is the armchair called “Le Jour et la Nuit”, currently presented in the Musée d’Orsay collections. The armchair is said to have belonged to Sarah Bernhardt and was in the collection of Josette Rispal before she gave it to the French 19th Century Art museum in 2005.

Our side-table stayed for several decades in the private collection of famous French auctioneer and author Maurice Rheims.

The art historian has written several books about the Art Nouveau movement including L’Objet 1900 in 1964 and L’Art 1900 one year later. In this last book Maurice Rheims mentions the side-table in a chapter dedicated to furniture pieces of the period. He writes :

“Unknown artist, side-table in olive wood and table-top inlaid with pewter and mother-of-pearl: the origin of this singular object in carved olive wood is unknown to us (…).” 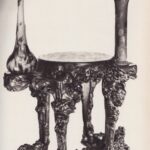 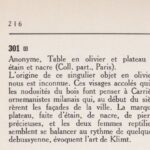 The side-table remained in the family after the death of Maurice Rheims in 2003.

In regard to creations from around 1900 Georges Rey always pushes back further the boundaries of Art Nouveau, thanks to sinuous and extravagant vegetal curves obeying no symmetry. Indeed the sculpture adopts the structure of the tables with roots and branches extending all over the surfaces of the piece. The artist truly conceived a vegetal and organic precious case.

No other cabinet-maker has gone that far in the development of this bold style. This extravagant side-table with an abundant decor welcomes a new freedom of expression.

DESCRIPTION OF THE SIDE-TABLE

This surprising side-table shows a rich decor. It stands on four feet linked by a spacer sculpted as stylised roots. The feet are connected by intertwined branches.

This extraordinary piece of furniture narrates a universal and symbolic tale of vanity, from the crib to the casket.

First we can notice the face of a child appearing amidst the ivy in one of the piles on the decor of the base. This image is a symbol of resurgence, life seems to renew itself and spring from the ground. This is the first step of the four ages. On each foot is shown the evolution of a woman’s life. Young, smiling and innocent she is then in love and serious before being depicted with a heavier body and a face marked by the passing of time. The last scene shows her decrepit in her old age.

This cycle echoes an ancient form of art, the memento mori, particularly in favour during the Middle-Ages and Renaissance.

Moreover we can observe an agile and twisted salamander. This reptile was not only a symbol of everlasting faith but also of rebirth, like the phenix. As explained by Michael Maier in 1613 salamanders are associated with the cycle of life and the resurrection.

Finally, to complement the Four Ages, George Rey uses another theme about evolution, the four seasons.

The four feet of this extraordinary table represent the different ages of life through the depiction of the four seasons, a theme ubiquitous in French furniture art since the Renaissance. Each season is attributed to an age.

Let’s start the cycle of seasons with Spring. Georges Rey personifies Spring with as an allegory figured as a bare chested young woman. Of the different ages of life she is to represent Adolescence. She shows her right profile and wears a hairdo characteristic of the Turn of the Century.

The allegory smiles gently and seems to be kissing a dove of which we can only distinguish the head and wings in low relief. This bird stands for purity and innocence. Another dove spreads its wings in the right part of the side-table’s body. The naked figure of the young woman is skillfully hidden by a bunch of roses and peonies both fully bloomed and as flower buds.

The left part of the scene is also covered with innumerable flowers as a millefiori background. We can recognize roses thanks to their petals and serrated leaves.

Below the allegory, the table’s foot goes back to a vegetal form. It is shaped as a trunk emerging from rocks.

The second season also follows the Four Ages and stands for Adulthood, it is the season of love.

The decor shows a harmonious composition topped by the face of the young woman. The rest of her body is obscured by vegetation. Georges Rey beautifully renders her feminine mane with dramatic strands of curly hair.

She discovers love with a first kiss timidly given to a man.

The allegory of Summer is the opportunity to represent wheat sheaves caressed by the wind. On the man’s torso, a large hibiscus flower has bloomed. It symbolises his love for the woman and the perfection of shapes.

In Autumn, vines and grapes have replaced wheat for the harvest to come. The woman is mature. Her face shows marks of age and seems happy with wine.

She smiles, her eyes are joyful. She is surrounded by large vine leaves and scrolls illustrating a new way to depict nature, emphasising its sinuous forms.

This depiction echoes bacchanals, those eccentric parties thrown in hommage to the god of inebriaty, Bacchus.

The last season depicted is of course Winter. The artist uses the traditional figure associated with the theme; an allegory decrepit with the passing of time. Here, the body of the woman emerges from a holly tree, revealing one breast.

The care given to the representation of this season is remarkable, especially in the depiction of the old age. The woman is at the dusk of her life, her face is parched, the gaze fearful and the ribs protruding.

The old woman seems to be struggling against an icy wind. The wing of a raven covers its head, like a headdress. We observe, in fact, the presence of two crows in flight. One of them has his head turned towards the woman, while the other continues his crossing in these headwinds. In Western culture, the raven is perceived as an ominous bird, due to its black plumage, its hoarse cry and its necrophagia. Popular tales make this bird a macabre and fatal appearance, as in the short story The Raven, (Le Corbeau) by the novelist Edgar Allan Poe published in 1845.

The background of the scene is dotted with holly leaves, undeniably linked to the winter period. The presence of this plant with thorny leaves, which seem to cling to the flesh of the woman, reinforces the roughness and hardness of this scene.

The top of this round side-table is enriched with a marquetry bearing the influence of Japanese motifs in vogue during the second half of the 19th century, especially with Impressionists painters. The marquetry comprises several wood species allowing contrasts and shadows on the vegetal decor.

This scene evokes an idealised landscape where two women are in harmony with nature. Indeed the artist represents their bodies and the water in the same way with inlays of paua mother-of-pearl. This materials originates from New-Zealand and offers iridescent nuances between blue, purple and green.

The harmony of the water colours and the two bodies gives crucial informations regarding the identification of the two women. They appear as two aquatic divinities known as naiads. In Greek mythology those creatures are the nymphs of fresh waters.

If we observe carefully the landscape we can imagine the two nymphs are limnads, the naiads of the lakes. They feed on ambrosia, a beverage regenerating their beauty.

The face of both women looks almost reptilian and is made of burgau mother-of-pearl with lead lines for the eyes.

In this burgauté décor the limnads appear by the banks of a lake where grow rush and reed. Cattails and flowers follow the edge of the table-top. In the left hand side one of the nymphs, kneeling in shallow waters looks like she is parting plants with her left hand, discovering a white heron ready to fly away.

The other limnad stands behind her, in the centre of the composition. She is partly hidden by a screen of vegetation. She runs her hand through her long pearly hair, the bust arched in a sensual posture.

On the right hand side of the table-top an opening in the vegetation let us peak at a background revealing a blue sky with marquetry clouds. The lead inlay on the horizon gives the sky a clear and luminous aspect. On the shores of the lake stand three white herons. One of them has in its beak a frog still fighting to get away. The table-top is achieved by rush and cattails.

In his book Art 1900, Maurice Reims says this table-top seems to swing to the music of Claude Debussy while alluding to the art of Gustav Klimt.

The Four Ages is a theory dividing life in distinct periods following a growing increase in age. This concept appeared during Latin antiquity and allowed Greeks to situate themselves according to the krisis which is a class of ages and is based on physical appearances.

The philosopher Pythagoras brings more nuance and adds the age of Adolescence between Childhood and Adulthood. This cycle is used by Philippe de Novare and other Medieval artists, whether in painting or in sculpture.

Since then, authors compare those four periods to the four seasons as they evolve in a comparable way.