IMPORTANT POLYCHROME LOW-RELIEF DEPICTING CHRIST IN THE MOUNT OF OLIVES

IMPORTANT POLYCHROME LOW-RELIEF DEPICTING CHRIST IN THE MOUNT OF OLIVES

This scene of Christ praying in the Mount of Olives follows the Last Supper and precedes the arrest. The episode is told in three gospels (Matthew 36:36-46, Mark 14:32-42, Luke 22:39-46). Artists have usually depicted Luke’s version, with Jesus kneeling instead of bowing, face against the ground, like in the two other gospels.

This theme was particularly in favour during the late Middle-Ages, notably in Germanic regions. This interest can be explained by the liturgy and the popular devotion of the time. Indeed, mystic scholars would advise worshippers to meditate on Christ’s sufferings while contemplating the cycle of the Passion. Thus, worshippers praying for their redemption identified with the figure of Christ praying before his death, sacrificing himself to redeem humanity.

From the 16th century onward, the celebration of the night of Maundy Thursday could be held outside the church in front of life-size depictions of this episode of Christ in the Mount of Olives.

Smaller depictions were meant for a private use to decorate chapels or private oratories. Those reliefs could also be part of a larger ensemble figuring various biblical scenes.

After having shared his last meal with his disciples, Christ went to the garden of Gethsemane, to the Mount of Olives, an enclosed olive-tree grove. He was accompanied by Peter, James the Great and John. The three of them quickly fell asleep will their master prayed.

In the foreground Jesus is kneeling. Hands in prayer, alone and anxious about his upcoming ordeal. He is bare feet, dressed in a long golden tunic. The heavy fabric is marked by deep pleats. Strands of curly hair spread in his back.

Behind him are the three apostles. Peter and John are figures according to the established iconography – the former is old, bearded and bold while the latter is young, beardless and with lush curly hair. They are both seated with their head in their hand, sleeping soundly. James his hidden behind the shoulder of his brother, one can only spot the top of his head.

The scene takes place amidst rocks evoking the scene at the Mount of Olives from the gospels. On the right side is sculpted a bountiful olive-tree.

A strong feeling of calm is conveyed by this large low-relief. The faces, the draperies are finely executed.

This depiction is very close to the engraving by Martin Schongauer, Christ on the Mount of Olives from around 1480. One can recognise the same attitude of Christ kneeling, with his head raised and hands in prayers. 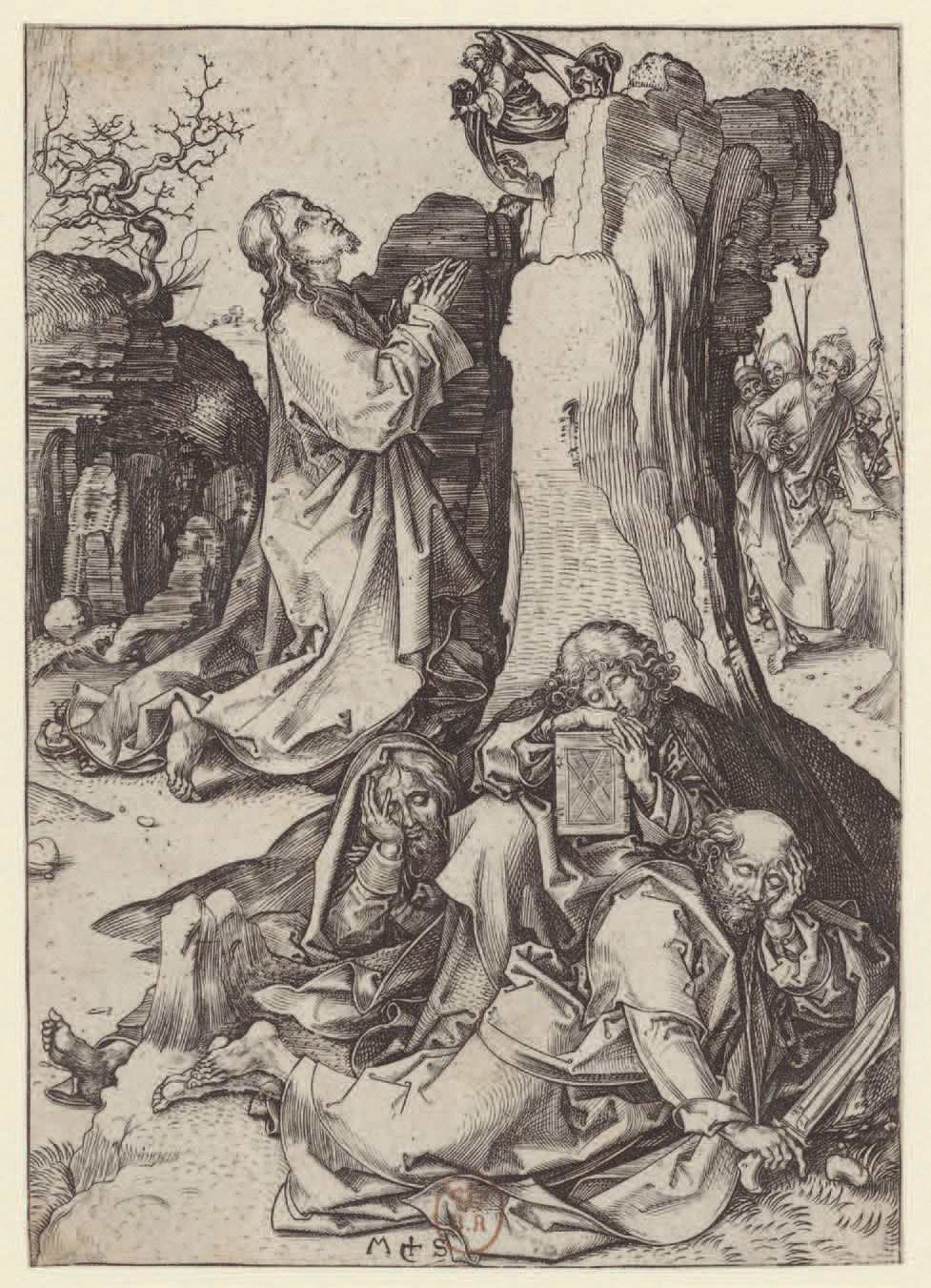