By the end of the first half of the 16th century, the conception and ornamentation of French furniture knows a major shift. The big construction projects and commissions emanating from the royal family and royal court stimulate the creativity of artists. Drawing inspiration from the Antiquity, artists develop a new ornamental vocabulary they spread throughout Europe thanks to leaflets and engravings. The growth of the printing industry is a major help in the dissemination of new ideas. Furthermore, Italian artists at work on big projects such as the Château de Fontainebleau gives France an appetite for Renaissance style. Indeed, it is in the stuccos of Rosso Fiorentino and of Il Primaticcio, executed around 1540-1550, that we can pin point the origin of masks, chimeras, harpies, sheathed figures, fruit and flower garlands.

The art of furniture is also subjected to this evolution of tastes. Artists working on their conception and ornamentation, cabinet-makers and carvers, find inspiration in illustrated books and in emblem and ornament compilations. Far from reproducing motifs identically, artists feed from those prints and multiply motifs in an infinity of variations.

This two-bodies cabinet presents a rich and original decor illustrating perfectly the Italian, Fontainebleau and Antique influences at work during the late 16th century. The presence of six terms also demonstrate the importance of ornament books such as the one published by Jacque Androuet du Cerceau.

This cabinet of elegant proportions opens with four door-leaves and two drawers in the belt.

The lower body is vertically divided by three sheathed terms. The two lateral male terms are crowned with fruits, an acanthus leaf is secured around their waist with a belt. The central term is a female one.

The two door-leaves present a rigorous and symmetrical composition. Standing on a drapery hanging from a rod, two foliated creatures spread their wings. They have the face of an old bearded man and they wear a crown. Both of them are flanking a triangular element topped by a finely carved ram skull. Two aquatic animals are facing each other underneath the pyramid.

The drawers in the belt are framed by two mouldings decorated with acanthus leaves and various flowers. Each drawer is centred by a beautiful mask with faun-like pointed ears around which spread olive branches.

The upper body is flanked by two female terms with draped sheathes adorned by masks holding fruit garlands in their mouths. The central term is a male one. The large wincing mask placed on its waist ingeniously hides the keyhole.

The panels of the upper body’s door-leaves are adorned with wincing masks in high relief. On each side the artist has depicted dancing putti in a graceful and remarkably dynamic manner. Above the mask, flower stems spring from a ram skull. Two snails slither on the leaves. An angel head tops the panel and responds to the one set amidst draperies in the lower part of the panel.

The recessed panels are assembled within a frame enriched with delicately carved flowers.

The terms of the upper body support the overlapping cornice.

The sides of the cabinet are carved with large vegetal elements adopting animal-like shapes. The leaves are thick and the carving is decisive and sharp.

One can admire the diversity of forms to be found on this cabinet. The artist has used a very rich vocabulary, playing with decorative motifs such as palm leaves, eggs-and-darts, laurel leaves, roses, scrolls, etc. One can also note the expressivity of the faces allowed by a very precise sculpture.

Thus, it seems the artist who made this cabinet probably drew inspiration from Jacques Androuet du Cerceau’s designs. The terms and caryatids crowned with fruits appearing on this cabinet do indeed look like they came out of Du Cerceau’s engravings. The origins of the strict symmetry of the decor, the dynamism of the characters with their extraordinary movements, the draperies and olive branches can also be attributed to the same artist.

Comparison between the ornamental designs of Jacques Androuet du Cerceau and the motifs used on the decor of this cabinet..

An obvious resemblance can be noted between those two elements depicting an aquatic creature with a foliated body, those snails or even those dancing angels. 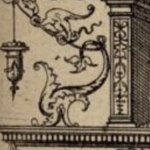 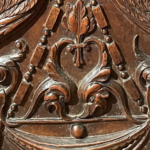 One can also find a similar snail. 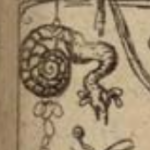 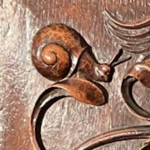 Angels dancing naked can also be spotted. As on the Du Cerceau’s engravings, the sculptor who made the decor of this cabinet was able to give a sense of movement thanks to the dynamic posture of the characters, one shows his back while the other shows his front. 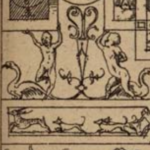 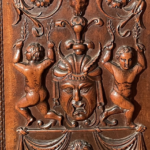 Finally, it seems very likely that the artist found inspiration in Du Cerceau’s models of caryatids with their hair tied and knotted draperies, to carve the one gracing the cabinet. 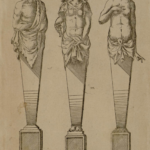 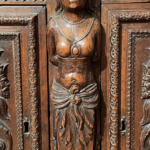 The ornamental decor of the door-leaves shows the extent of the cabinet-maker’s knowledge regarding printed models, Italian art vocabulary and Fontainebleau’s creations.

The sculpture work is generously distributed all over the cabinet with great rigour and an incredible virtuosity allowing us to locate the origin of this piece in Burgundy. This cabinet was undoubtedly made by a great master of the region during the Second French Renaissance.

We thank Mr Jean-Pierre Jacquemart for his precious help in analysing this cabinet.